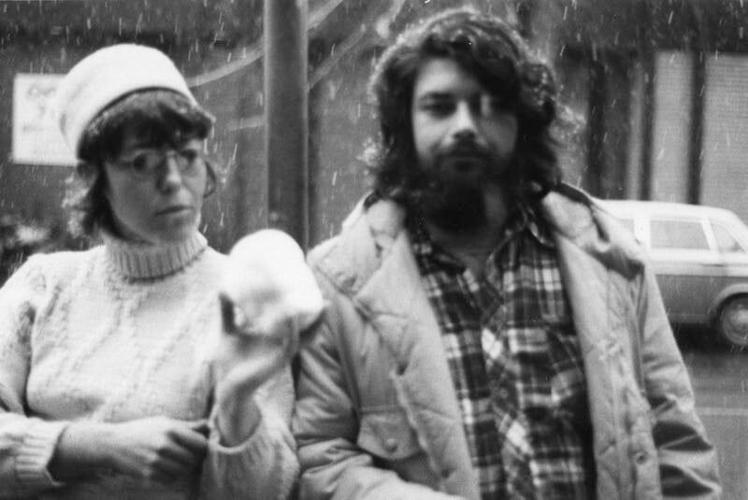 The late Portland author Katherine Dunn and Impossibilists' co-founded Tom Cassidy outside the Long Goodbye in the 1970s. 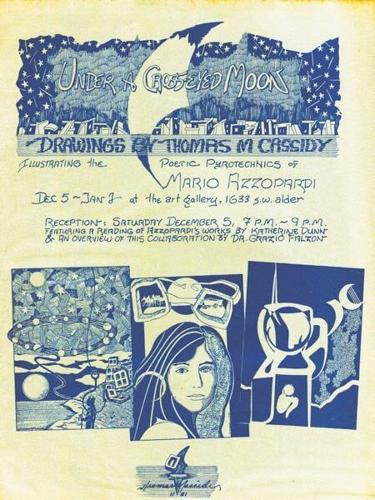 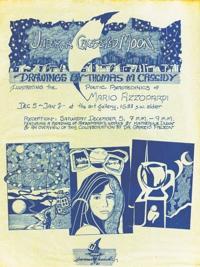 A flyer for the last appearance by Katherine Dunn at an Impossibilists event in 1981, illustrated by co-founder Tom Cassidy. 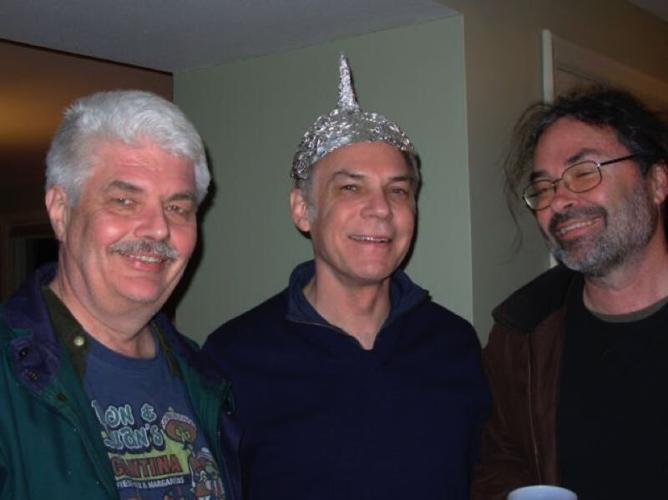 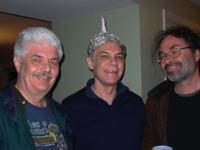 A photo from the 2008 Impossibilists reunion including (from left) Tom Cassidy, Robert Luruie, and Mark Sargent. Courtesy photo: Tom Cassidy

The late Portland author Katherine Dunn and Impossibilists' co-founded Tom Cassidy outside the Long Goodbye in the 1970s.

A flyer for the last appearance by Katherine Dunn at an Impossibilists event in 1981, illustrated by co-founder Tom Cassidy.

A photo from the 2008 Impossibilists reunion including (from left) Tom Cassidy, Robert Luruie, and Mark Sargent. Courtesy photo: Tom Cassidy

Portland writer Katherine Dunn's posthumously published novel "Toad" is receiving rave reviews. Released six years after her death, it is narrated by Sally Gunnar, an aging loner who looks back on her younger years hanging out with students at a private college very much like Reed, which Dunn attended for a few years in the early 1960s. It was released more than three decades after Dunn's highly acclaimed 1989 novel, "Geek Love."

Dunn wrote "Toad" after the release of two autobiographical novels, "Attic" (1970) and "Truck" (1971). Many of the current reviews note that she was a single mother working low-wage jobs to make ends meet while writing it. Dunn was crushed when "Toad" was rejected by her publisher in the early 1970s and she struggled unsuccessfully to sell it to other publishers for several years before giving up, the reviews recall.

All that is true as far, as it goes. But some of the reviews make it sound as though Dunn was as lonely as Gunnar while trying to sell "Toad" and maybe longer. That is not true. She was deeply involved in a lively and at times chaotic local arts scene that included many other writers, as well as performers and visual artists.

Among other things, Dunn read poems and prose at open mic nights at bars like the Long Goodbye at Northwest 12th and Johnson, where she was also part of the tough audience.

"Katherine and other poets sat in seats above the stage, and they heckled everybody. They could be really cruel. They drove them off the stage. But if you could make it through two poems, you were accepted," local poet Casey Bush remembers.

Portland poet Doug Spangle remembered watching Walt Curtis on stage at the Long Goodbye. Curtis was in his element, Spangle wrote in the August 1997 issue of the alternative PDXS newspaper.

"One guy who'd dominated the night, the loudest and rowdiest, who looked like a chicken from outer space dressed in jeans and worn flannel, his oversized and balding head resembling a cantaloupe wagging on the scrawny stem of a neck, had heckled loudest and hardest. When his name, Walt Curtis, was called, he stomped up to the stage and began reading his first poem to a tsunami of boos and catcalls. I noticed, however, that he fed off the static, and by the second poem, an ode to his fragrant laundry bag, the audience was in his pocket. The true Bad Boy Poet knows how to work his notoriety," Spangle wrote.

Other rowdy readings took place at the Earth, a long closed biker bar next to Cinema 21 in Northwest Portland, and Satyricon, the legendary underground rock club in Old Town.

Dunn was also part of a loose-knit collective of artists, writers and performers that called themselves The Impossibilists that was formed in the late 1970s. They staged more organized events, issued an "Impossibilist Manifesto" that challenged authority and reality, and reproduced their writings and drawings in a series of followup publications for around 10 years. Some of the issues included Dunn's poems and two chapters of "Geek Love," a decade before its release.

Those days are largely forgotten now, although many of the participants are still alive. They include the co-founders of the Imps — as they were also known — Tom Cassidy and Mark Sargent, who met as art students at the former Mt. Angel College in the early 1960s. Also still writing are local poets Spangle and Curtis, who is perhaps best known as the author of "Mala Noche," a novella made into a movie by Portland director Gus Van Sant.

The Imps also live on in some of their publications preserved at the archives in the Watzek Library at Lewis & Clark College. That is where Dunn donated her work before passing away in 2016. "Toad" was discovered there by Naomi Huffman of FSG books in 2019 and published with the cooperation of Dunn's estate this year. The release event was held at Powells Book on Nov. 1.

Lewis & Clark archivist E.J. Carter researched both collections to write an academic paper on the Imps. It was published in the Northwest Review of Books in 2016. The paper — titled "The Impossibilists: The Avant-Garde in Portland" — argues their publications helped shape Portland's culture identity. It notes they took their name from a line in the "Futurist Manifesto," published 1909 by Filippo Tommaso Emilio Marinetti an Italian poet, editor, art theorist: "Why should we look back, when what we want is to break down the mysterious doors of the impossible?"

"The Futurists, like subsequent avant-gardes, rejected the past and all its influences. They hoped to overcome alienation and reconcile art with ordinary life. There was nothing mystical about Marinetti's view of the impossible; it was simply the future, the set of things it was assumed could not be done.'We already live in the absolute,' he wrote, 'because we have created omnipresent speed.'The Imps drew on other influences in the historical avant-garde, including Dadaists and surrealists (Cassidy named his cat Tzara and signed letters "Bob Desnos," after the poet and radio personality), but the idea of breaking with the past to integrate art with life was fundamental," Carter wrote.

Dunn's involvement with the Imps might seem puzzling to anyone who reads "Toad" or even reviews of it. Gunnar is critical of the college students she met, considering them pretentious and unprepared to live in the real world — contributing to a tragedy revealed late in the book.

Contacted by the Portland Tribune, Cassidy insists Carter took the Imps too seriously. He claims he didn't even understand his paper when he read it.

"We were just having fun. We weren't trying to change the world," said Cassidy, who nevertheless admits the name did come from the "Futurist Manifesto."

There are many reasons to believe the Imps were not as pretentious as the students Dunn puts down in "Toad." The few existing descriptions of their performances include marathon readings in clothing stores and a downtown parade featuring a mime and a fire eater.

"We weren't applying for arts grants or trying to get into the academy," said Cassidy.

After moving to Northwest Portland in 1975, Cassidy found work at the Earth, where the Imps staged several of their events. That's where he first met Dunn, who lived a few blocks away, when she applied to work as a bartender. She famously broke up fights there by jumping on the backs of one of them and not letting go until he stopped.

And then there are the low standards of the publications, beginning with the "Impossibilist Manifesto," published in the Spring of 1975, and ending with #21 published in February 1986. Several other alternative publications at the time were much better produced, including the Clinton Street Quarterly, Mississippi Mud and the Portland Scribe.

"They were really fly-by-night when they started. They were placing broadsheets on windshields of cars in parking lots," said Bush.

Most of their publications are typewritten poems and prose, with simple illustrations. The majority are under 20 pages and appear to have been xeroxed. When subscriptions were first offered for $2.50, the ad described everything they would not include: "No entertainment guide! No reviews or small press roundups! No lengthy criticism! No stylebook used! No typesetting! No guiding editorial policy! No deadline or silly regularity of issue dates! No 'theme' issues that stick to the theme! No holiday specials! No money!"

Carter believes the Imp's influence went well beyond their humble origins, however.

The Imps dispersed as the 1980s progressed, when Dunn was devoting more of her time to "Geek Love." Her last appearance with them was a reading at an event titled "Under a Crosseyed Moon" at an art gallery called The Art Gallery in downtown Portland on Dec. 5, 1981. Cassidy illustrated and lettered the flyer for it.

The raucous open mic poetry readings eventually gave way to more civil events at venues like Cafe Lena, a restaurant opened by the well-respected poet and author Leanne Grable, during the 1990s.

An Impossibilists reunion with multiple events at various locations was held April 3 through 8, 2008. They included readings, concerts and movie showings. Also included was the release of the last publication by the Imps, titled "Impossibilists #100," although it was more likely the 22nd. Dunn contributed to it, along with such regulars as Cassidy and Curtis. The reunion was funded by the Oregon Cultural Heritage Commission, a nonprofit organization formed in 1988 to discover and commemorate important literary and cultural contributions to Oregon's history.

Against all odds, the Imps' publications are now highly sought after. The University of Ohio also has a collection in its archives. And Burnside Rare Books in Portland is offering an incomplete set for $750 — something none of the participants could have never predicted.

E.J. Carter's essay on the Impossibilists can be found here.

Portland Tribune reporter Jim Redden is a friend of Dunn's who played a minor role in the publication of "Toad."