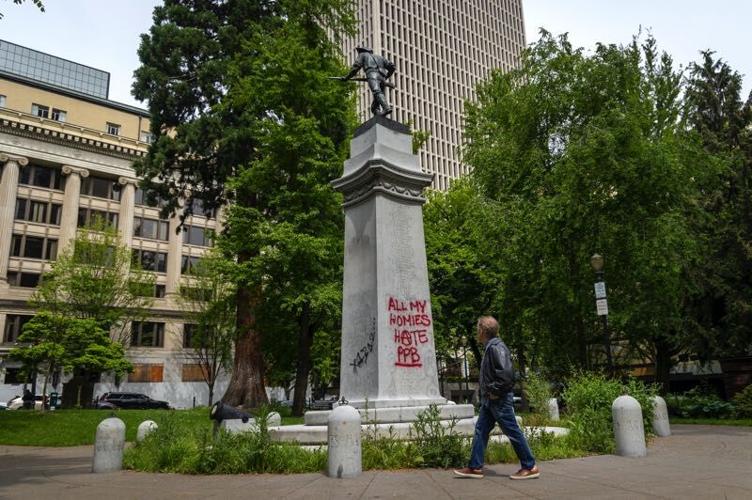 Local author Pierre Ouellette in downtown Portland today, walking around a monument defaced with anti-police graffiti, like his 2014 novel "The Forever Man" predicted. 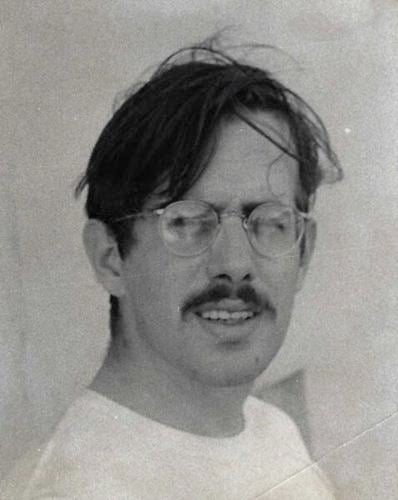 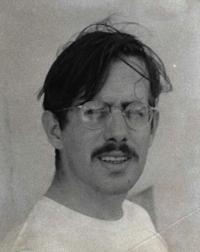 Pierre Ouellette when he was a student at Portland State University around 1967 — a period he calls the young artist in revolt, a very low-cost occupation. 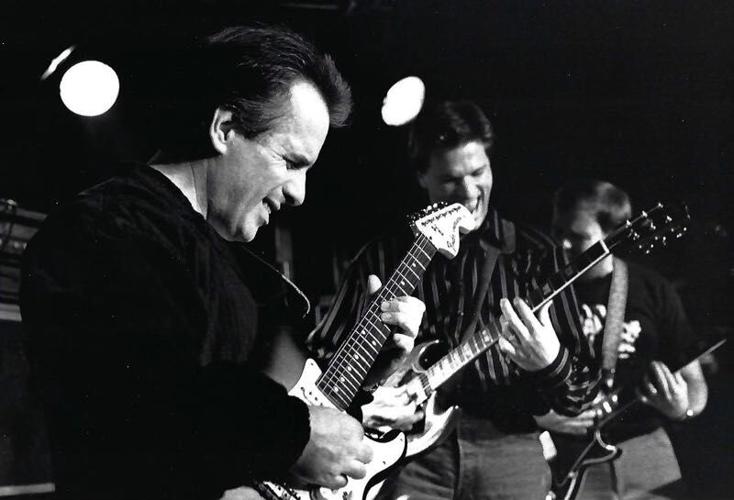 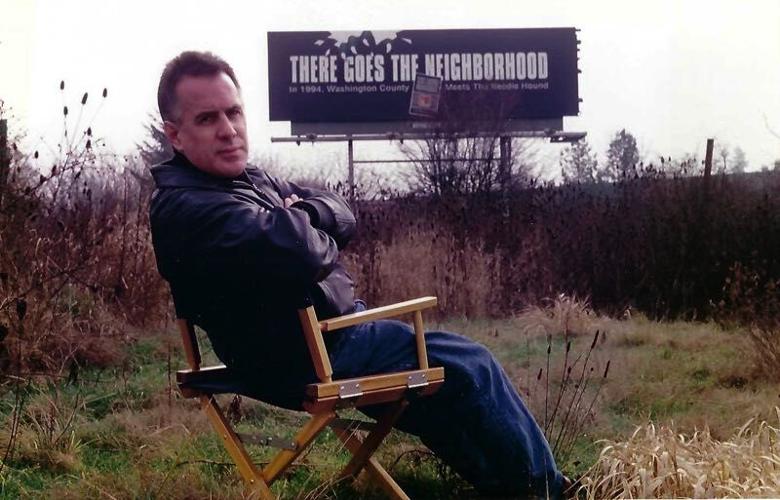 Pierre Ouellette in a 1994 promotional photo for The Deus Machine just off Highway 217. The billboard in the background was rented refers to Beaverton being eaten by AI-driven monsters of various sorts. 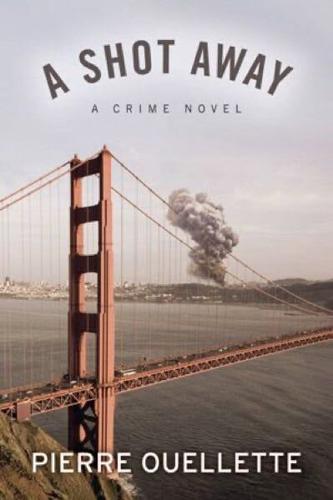 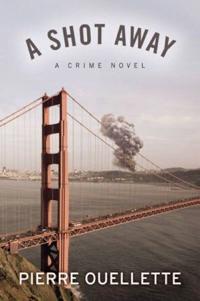 The cover of A Shot Away, the most recent novel by local author Pierre Ouellette.

Local author Pierre Ouellette in downtown Portland today, walking around a monument defaced with anti-police graffiti, like his 2014 novel "The Forever Man" predicted.

Pierre Ouellette when he was a student at Portland State University around 1967 — a period he calls the young artist in revolt, a very low-cost occupation.

Pierre Ouellette in a 1994 promotional photo for The Deus Machine just off Highway 217. The billboard in the background was rented refers to Beaverton being eaten by AI-driven monsters of various sorts.

The cover of A Shot Away, the most recent novel by local author Pierre Ouellette.

In 2014, local writer Pierre Ouellette released a near-future dystopian novel set in Portland that predicted the worst of the city today. It received good reviews, but then something went wrong and "The Forever Man" has not been available for years.

In the novel, extreme income inequality has made the city unaffordable for all but the richest. The streets are lined with homeless people living in vehicles. City government has lost control of everything east of the Willamette River, which was ruled by violent gangs. Many Portland landmarks are prominently featured.

Today, Ouellette said he believed Portland already was headed in that direction even before home prices skyrocketed, COVID-19 battered the economy, rioters shut down the urban core, homelessness and gun violence spiked, and fentanyl made everything even worse. As Ouellette saw it, Portland has relatively few middle-class jobs and its public education system has been failing students for many years, creating a large disaffected population of underemployed young people to whom crime and anarchy offer an exciting alternative.

"At the time, a lot of evidence was accumulating about the growing disparity in income between the top 20% and the bottom 20% of the U.S. population. I wondered how this trend might play out in Portland during the coming decades and produced a sprawling, complex story centered on an aging American oligarch who succeeds in creating technology to keep him forever young. All the while, society at large continues to crumble," Ouellette about the origins of "The Forever Man."

This was not the first — or last — time Ouellette had foreseen a future that came true. His first novel, "The Deus Machine," published in 1993, was about artificial intelligence threatening humanity. "The Third Pandemic," published in 1996, centered on a globe-sweeping virus that followed the Black Plague and the Spanish Flu. "Origin Unknown," published in 2011, involves a mysterious figure heading an oxycodone drug ring.

Switching from techno-thrillers to crime, in 2019, Ouellette published "Bakersfield," the first of a trilogy that followed a disgraced Los Angeles Police department vice cop seeking redemption and new life from the 1950s to the 1970s through a series of encounters with such pop culture figures and events as country music legend Merle Haggard, the Summer of Love, the ill-fated Altamont concert, the radical Weather Underground, and Charles Manson and his followers.

The concept seems outlandish — until you remember that filmmaker Quentin Tarantino released "Once Upon a Time in Hollywood" that same year. It follows the similar trajectory of a fading actor played by Leonardo DiCaprio through a similar pop culture-littered landscape, climaxing with a confrontation with a fictionalized version of the Manson Family.

Ouellette was well into writing the second novel, "Haight St.," when "Bakersfield" was released. "A Shot Away" came out in 2021.

But "The Forever Man" became unavailable in 2019. It was only released as a digital e-book and the publisher went bankrupt. Ouellette had moved on by then but said he always hoped the book could be revived.

Now Ouellette is in negotiations with his current publisher, Portland-based Jorvik Press, to bring out an updated version of "The Forever Man." Founder and editor Peter Stansill said it will be released early next year.

"It needs some work, but it's set in a Portland that feels very much like Portland today," Stansill said.

At 77, Ouellette is still trim with swept-back hair and a self-deprecating sense of humor. Despite publishing seven books, the Lake Oswego resident admits he never intended to be a serious writer.

"I just wanted to write a paperback that would be popular on racks in pharmacies and bus stations," Ouellette said.

His original agent thought otherwise about "The Deus Machine" and arranged for it be published as a hardcover by Villard Books. It went on to be released in seven languages.

Even then, Ouellette did not seek the spotlight.

"There are two kinds of writers, Ernest Hemingway and J.D. Salinger. Hemingway was a self promoter and Salinger disappeared after publishing 'Catcher in the Rye.' I'm more like Salinger."

In fact, Ouellette did not need to pursue a writing career. By the time his first novel came out, he was already into the third phase of his professional life. He was born in Seattle in 1945. His family moved to the suburb of Lakewood, where he learned to play guitar and became a member of several regional bands, including an early version of Paul Revere and the Raiders, as well as Don and the Goodtimes. He went on to graduate from Portland State University in 1969 and eventually played with such national jazz legends as Jim Pepper and David Friesen in Portland.

The second — and most lucrative — career built on the creative writing skills Ouellette began developing in high school. Around 1978, he started picking up numerous writing gigs in the burgeoning tech industry, mainly with Tektronix and Intel. This led him to co-found the Karakas VanSickle Ouellette advertising and public relations agency, which grew to become the second largest in the state with more than 150 employees.

But Ouellette admits that, as the business grew, he had fewer and fewer opportunities to write creatively. One day, Ouellette said he told local writer and friend Mark Christensen about an idea that came to him for a novel during a boring corporate meeting. Christensen told Ouellette he had to write it before someone else did, and he'd have to commit suicide.

"I was very lukewarm about the idea of killing myself, so I started working on the book instead," Ouellette said about the origins of "The Deus Machine."

When KVO sold itself to a national agency in 2002, Ouellette continued under contract for a couple years, and then left to pursue his writing career full time. He also produced a documentary on the late guitarist Jim Mesi, a former fixture in the Portland music scene for Oregon Public Broadcasting. It is available on YouTube.

A casual conversation also led to the resurrection of "The Forever Man." It happened when Ouellette met Stansill at a party at the house of a mutual friend.

Born in Yorkshire, England, Stansill was one of the editors of The International Times, which was published in London in the 1960s and is considered the first underground newspaper. After a stint as a war correspondent, Stansill moved to San Francisco and became an editor at the Berkeley Barb, one of America's leading underground newspapers at the time, along with the Los Angeles Free Press and New York's Village Voice.

Stansill moved to Portland in the 1980s to run what he calls "a creative shop" and eventually founded in 2013 to publish a friend's book about how the mental health system failed his daughter. He went on to publish an eclectic collection of titles that interested him. They include a first-hand account of David Bowie's early days and a biography of early Black militant Robert Franklin Williams.

"Our evolving mission is to publish books that tell a story about how people, places and times intersect. The result might be intriguing, evocative, heart-breaking, thrilling or, indeed, depressing. But it will always be mostly true," the publishing house's website reads.

By then Ouellette had switched to historical-based crime fiction and completed "Bakersfield," but had been unable to sell it. Stansill offered to read the manuscript and was so impressed he agreed to publish the trilogy.

Ouellette has included fictional characters from the Berkeley Barb in the second and third volumes, which he extensively researched to include detailed descriptions of actual events.

"I didn't do much fiction until Pierre. I consider him very good," Stansill said.

Eventually, Ouellette told Stansill about his disappointment that "The Forever Man" no longer was available. Stansill read it and started negotiating with Ouellette over how to publish it. The updated version could be available within eight months.

"The Third Pandemic," Atria (Simon & Schuster), 1996, hardcover and paperback, republished as an e-book by Jorvik Press in 2021