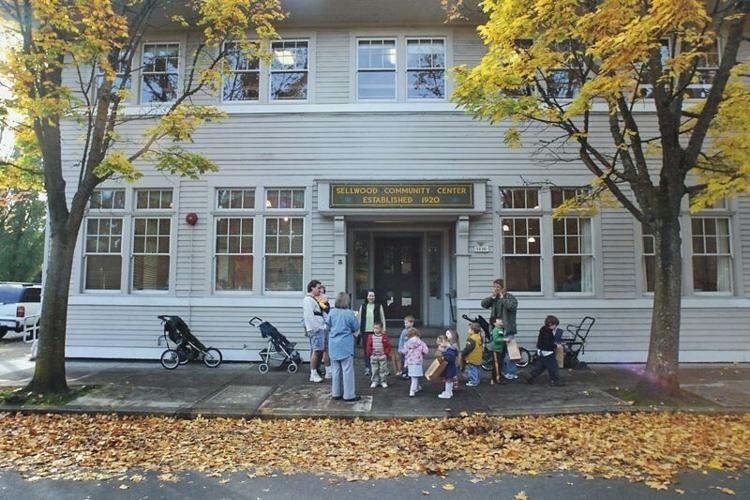 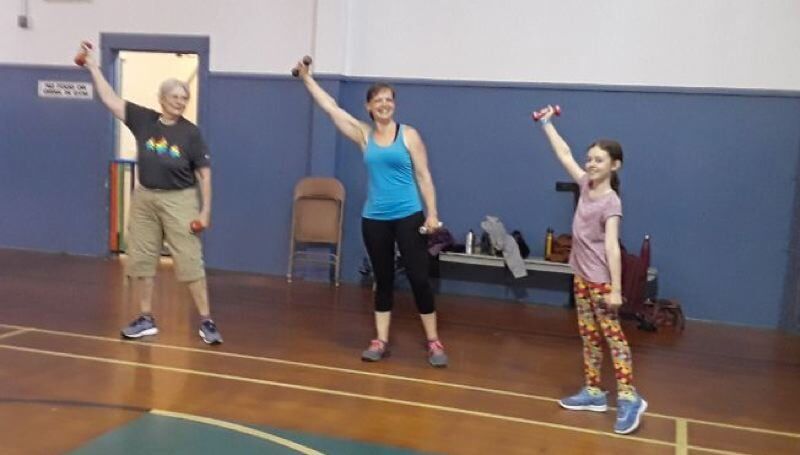 Three generations of the Hepper family participate in Exercise For Every Body offered at the Sellwood Community House. From left: Pam Hepper, Dana Hepper and Qahara Hepper.

Three generations of the Hepper family participate in Exercise For Every Body offered at the Sellwood Community House. From left: Pam Hepper, Dana Hepper and Qahara Hepper.

Sellwood residents have used their community center for over a century. In September, they were given the keys to the building.

That's because on Aug. 30, the city of Portland cut off funding to the park district property. Residents of the Southeast Portland neighborhood, however, would not allow the Sellwood Community Center to go down without a fight, as the building provides various popular programs including childcare and exercise classes.

The Friends of Sellwood Community House, a subcommittee of the neighborhood association SMILE — or Sellwood-Moreland Improvement League — successfully obtained permission to run operations in the building.

Members of the subcommittee signed a lease agreement with the city on Sept. 5, and got the keys the next day. The subcommittee has been established as a nonprofit and hopes to purchase the building down the line.

In a post on the subcommittee's Facebook page, member Kim Borcherding revealed late June that the center would be renamed Sellwood Community House, as a way to "separate ourselves from the Parks and Rec operation" and to restore the building to its former name.

Julie Currin, an active member on the SMILE board, Friends of Sellwood Community House member and mom of three boys, said she was "thrown into a panic" at the thought of closure.

Now, the feeling is "bittersweet," she said. "We're really happy that we've been able to step in and keep services going."

Gail Hoffnagle, the chair of Friends of Sellwood Community House, said, "We envision the center as a place where all kinds of people, both young and old, can gather together to have fun, meet new friends, recreate with old friends, learn skills and form relationships that foster a spirit of belonging to the neighborhood."

Those in leadership aim to make the programs affordable, so "no one feels left out because of income," Hoffnagle said.

The Friends of Sellwood Community House originally formed to gather support for the building at 1436 S.E. Spokane St. when threats of closure began 15 to 17 years ago.

"The Friends group has been active during times of threats and then traditionally has become quieter, sometimes even dormant, when the center has been successfully 'saved,'" Hoffnagle said.

Earlier in the summer, when awaiting a deal with the city, the Friends of Sellwood Community House worked to restructure facility operations. This included going through applications for after-school and preschool programs, creating logos and coming up with new programs. More than 70 people signed up to volunteer their services to the project.

Community members feared the center's closing meant losing its valuable history and services. Operating since 1910, and a part of the Portland Parks and Recreation system since 1920, the building is believed to be the second longest continuously operating community center in the city of Portland. In 2006, it was placed on the National Register of Historic Places.

Currin's motivation for working to keep the building alive stems from its childcare programs. Her 8-year-old has been a part of the after-school program at the center for three years, and one of her other sons has participated for the past year.

"They spend almost their entire summer there, as well as spring break, and other school breaks," Currin said in an email. "There are truly no other after-school programs available in our neighborhood (as) both local elementary schools have programs with long waitlists. Without the after-school program, I've been afraid my sons (as well as many neighbor kids) will become latch-key kids."

Since her initial panic, Currin planned and attended rallies, spoke at budget hearings and emailed and called commissioners. She said hundreds of families, including hers, had no option but to wait and hope that the Friends of Sellwood Community House could successfully take over, especially with a tight timeframe.

The elementary after-school program at the community center provides activities for about 95 children Monday through Friday. For younger children, programs include preschool, indoor park, baby art and messy art. Judo classes and private piano lessons also are available for all ages.

Victoria Hancock, who lives a couple of houses from the building, said she felt sadness but not disbelief when she heard about the center's fate this year, since the threat of closure had been in the air for years.

"We do understand the basic budgetary issues, but we think that dealing with them on the backs of the local community is completely unfair," Hancock said.

Karen Shumaker, a resident of the nearby Creston-Kenilworth neighborhood, said she felt parks were being picked on at a time of growth in the city and its population.

Parks and Recreation has to be a neighborhood thing, Shumaker said. "One of the city's goals has always been walkability, so why should people have to get in a car and drive five miles to a park or a community center?"

The Community House is a "real asset to the community," Shumaker said. "Really, when you walk in there, you feel like you're visiting somebody's house. It just has a great community feel to it, and all ages mix and mingle."

Though some residents use the center for childcare and after-school programs, adults also make use of the facility.

Since she moved to Sellwood in 1991, Hancock has participated in "Exercise For Every 'Body'" which meets three mornings per week for an hour. The class initially was led by instructors hired by the Parks Department from the YMCA, but "the pay wasn't sufficient for the time they had to put in," Hancock said. Three members of the class, including Hancock, volunteered to each lead a class once per week.

The monthly fee of $20 to $25 for weekly classes acts like rent for the gym, which includes a boombox, chairs and weights. Current participants are women ranging in age from 55 to 80 and occasional family members, with about 20 to 25 people overall in each class.

Hancock stressed the importance of the class and the impact it has made. Some rely on the class to bounce back from medical incidents. A younger man joined the class for several months after surgery, and Hancock has had both hips replaced. Many participants are single or widowed women.

"I am certain that for several, this group is their primary social contact and they would miss it grievously if it ended," Hancock said.

"This project is truly a demonstration of community spirit and it is strengthening ties between neighbors and the greater community," Hoffnagle said. "It is an empowering example of how people can work together for a common goal."

Throughout the process, what stood out to Currin was "watching the community come together and rally to make sure that this resource that we all value so much didn't just close down and get lost in the shuffle, that people worked very, very hard because it's such an important commodity."

Samantha Kar is a recent graduate of La Salle Catholic College Preparatory in Milwaukie. She is one of three summer interns working for Amplify, a Metro-supported project aimed at elevating the voices of students from communities historically underrepresented in local newsrooms.

The city of Portland's adopted budget for the fiscal year, which runs through June 2020, is $5.6 billion. Though that represents a 0.9% increase from last year's budget, some bureaus faced cuts.

With Portland Parks & Recreation experiencing a $6.3 million budget gap, many changes have been made around the city. Funding for the Sellwood Community House on Southeast Spokane Street ended in August, and the Columbia Pool on North Chautauqua Boulevard will close next July. The Community Music Center on Southeast Francis Street and the Multnomah Arts Center on Southwest Capitol Highway will receive less taxpayer funding.

This story is possible because of Amplify, a community storytelling initiative of Pamplin Media Group and Metro, the Portland regional government. Amplify supports three summer internships for high school journalists in the Portland metro region to cover important community issues. The program aims to elevate the voices of student journalists from historically underrepresented groups, such as communities of color, low-income residents and others. Pamplin Media Group editors oversee the interns, and Metro plays no role in the editorial process. Read more at http://www.oregonmetro.gov/news.